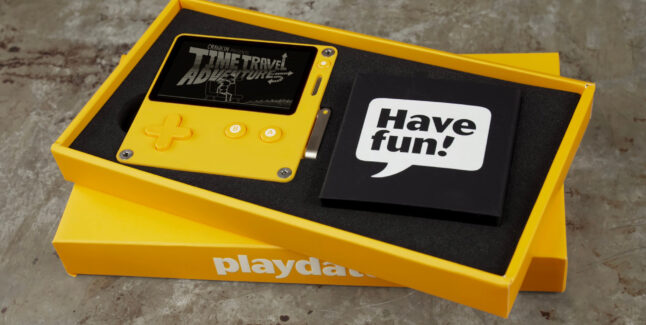 Two years ago, the Panic U.S. studio known for Untitled Goose Game and making Mac software said they would launch a US$179 tiny handheld called the Playdate with a black-and-white screen and a hand crank of all things. Games would be released in seasons of 24 games that will be released one per week (Season One added for free via Wi-Fi). They just updated their social media to say the handheld will launch in 2021 with the first 20,000 units having been ordered. And this week we’ll see their first 15-minutes-long video update detailing everything, it’ll premiere on Youtube Tuesday, June 8th at 9:00 AM PDT.

While most games are being kept a secret until they unlock, this GameBoy-esque handheld wouldn’t have gathered any interest if it wasn’t for the talented game designers they attracted, including:

What’s interesting is that third-party games can be installed directly on the Playdate without having to go through the studio behind the console, since the developer kit is software-based, anyone can create games for it.

Does the Playdate handheld interest you?