Looking for a guide to Sayu’s hangout event? Genshin Impact hangout events were released back in update 1.4 – they’re story heavy branching quests that allow us to spend time getting to know various four-star characters who don’t otherwise get much focus in the story.

Each hangout event costs two story keys to unlock, but once they’re unlocked, you’re free to replay them as many times as you wish. Story keys are obtained for completing eight daily commissions after reaching Adventure Rank 26. To access hangout events, you must have completed the quest ‘Prologue: Act III – Song of the Dragon and Freedom’.

There are multiple endings available for Sayu’s hangout event – and each ending gives you rewards and a unique hangout memory postcard. As you play through the event and reach different points in the story, you unlock progress on a quest progression map, allowing you to drop back in at any point to try out an alternate path. Here’s how to unlock all six endings in Sayu’s hangout event. 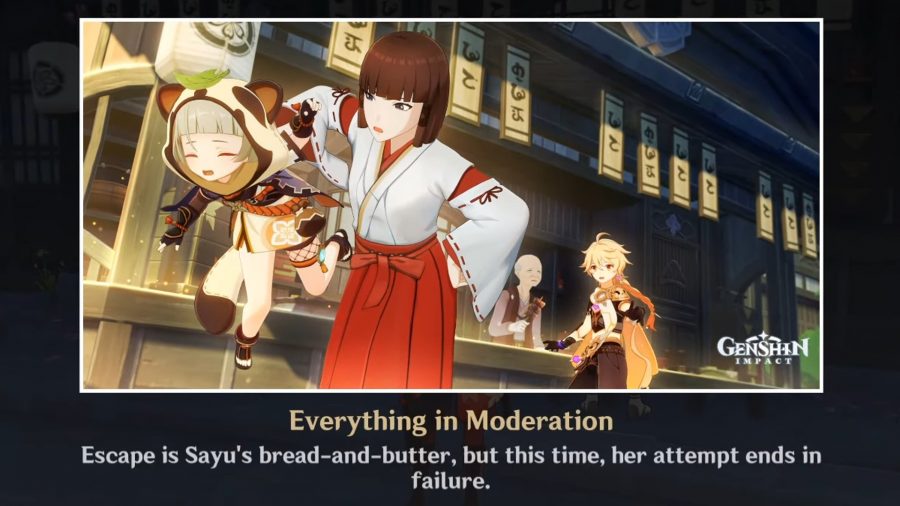 A Mysterious Gaze > Shuumatsuban Visitation? > Give It Up! > Recharge Plan > Hard Work Pays Off

After finding Sayu – she’s hiding in a barrel on the left of the steps – speak to Nano Kana about the assassination attempt, and when she says she will enquire further, thank her. You and Sayu will then head off to Chinju Forest for training. She explains that she wants more sleep to grow taller, and tells you she’s tired – say “Growing taller is what you really care about, isn’t it?” When she laments her lack of growth, tell her “sleep alone isn’t enough to make you grow taller”.

You then head off to Inazuma to get some food, and when she struggles, ask if she wishes to continue. After encouraging her to eat more, Sayu becomes incredibly full, and can’t escape in time when Nano Kana shows up again – unlocking the ‘Everything in Moderation’ ending. 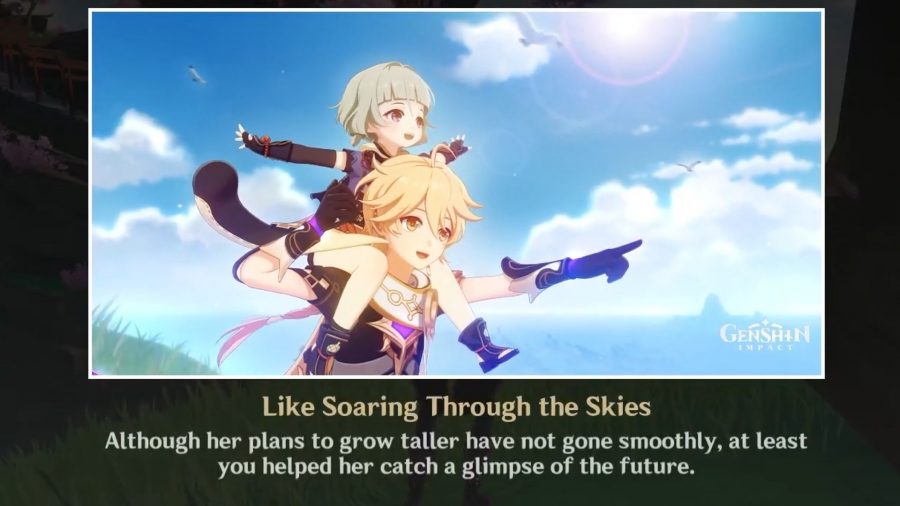 A Mysterious Gaze > Shuumatsuban Visitation? > Give It Up! > Recharge Plan > Exercise Follows Eating

For this ending, take the same route as the previous ending – ask Sayu about growing taller, and then advise her to try more than just sleeping. In Inazuma, when she hesitates over continuing to eat, encourage her to ‘consider other options’.

The two of you then head out to complete some training by defeating Treasure Hoarders. Sayu is dismayed when she gets patted on the head, so you take her to the mountaintop for some inspiration. 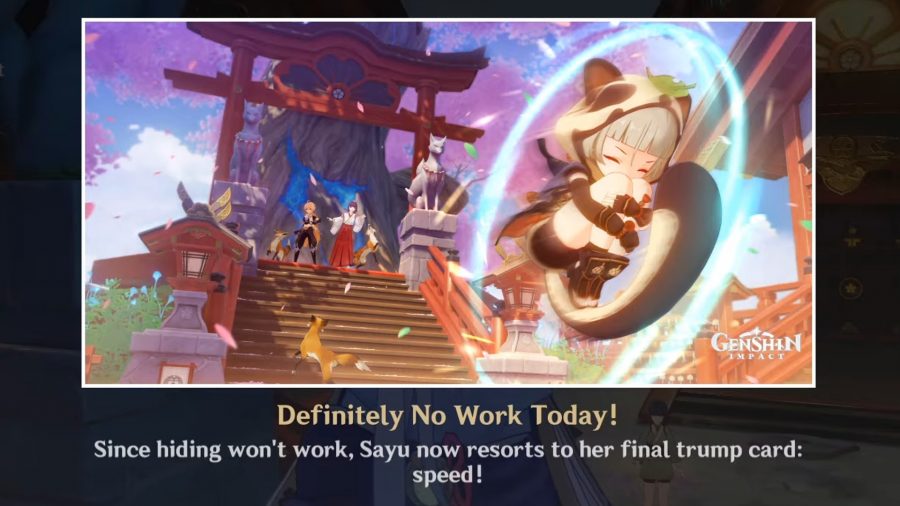 A Mysterious Gaze > Shuumatsuban Visitation? > Give It Up! >Sleep Alone Can’t Wait

Once again, when Sayu complains about wanting more sleep in Chinju Forest, say “Growing taller is what you really care about”. When she asks you for ideas, tell her that she needs better quality sleep. The two of you embark in search of napping spots: slimes are obstructing the first one, so you must defeat them. The second napping spot is covered in spikes, which you tidy away to protect the local wildlife.

When Sayu asks you to recommend a new nap spot, no matter what you say, she proposes the Grand Narukami Shrine. After you sneak in, Kano Nana suddenly arrives, and you attempt to divert her attention away from Sayu – to no avail. 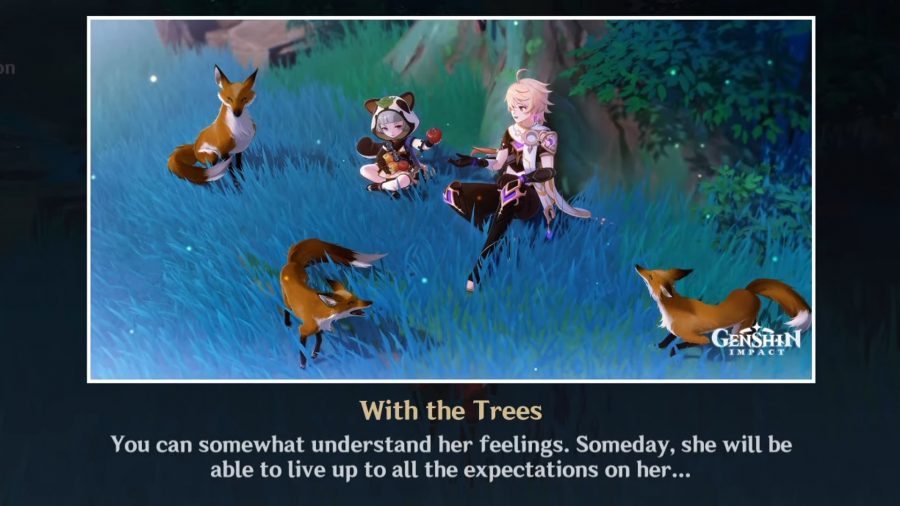 In Chinju forest, when Sayu tells you she’s tired, advise her not to neglect her work. Then when she complains about not getting important tasks, choose either of the two responses, and the two of you go through training together with Kano Nana.

As part of this training, you must complete an obstacle course within 90 seconds. Sayu congratulates you with the same encouragement her Sensei gave her, and you move on to combat training. After taking down some slimes as Sayu, the two of you head back into the forest for a rest. When she asks you what the tree symbolises, choose any of the three responses. 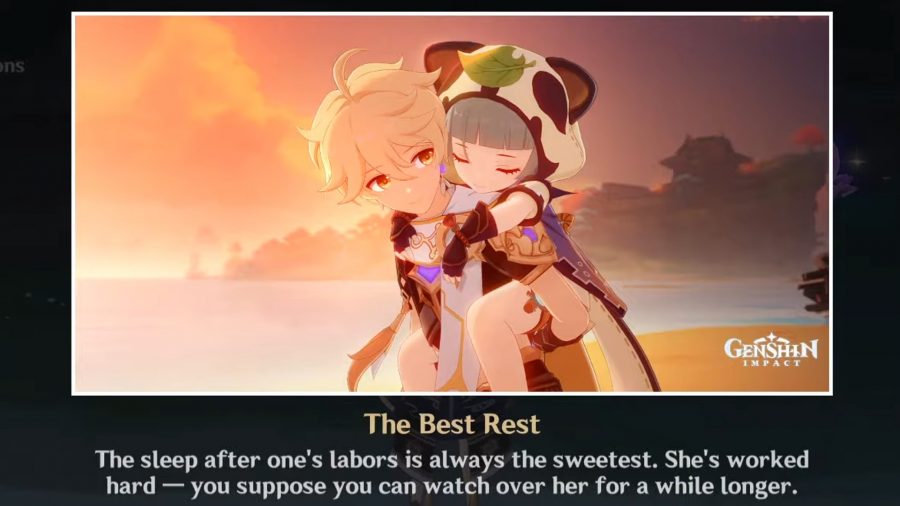 A Mysterious Gaze > Shuumatsuban Visitation? > Two Can Play This Game > The Truth Behind the Order

When speaking to Kano Nana about the assassination plot against you, tell her you will continue investigating on your own, too. Then, you and Sayu attempt to contact the person who delivered the order by convincing them Sayu actually carried it out.

At the meeting spot, Sayu tells Ogawa she has completed the assassination. Ogawa is surprised when you reveal the truth and confront him yourself. He says he had good reason to forge the mission – ask him to ‘tell the truth’. Ogawa then confesses that he was blackmailed by the Kairagi, who are holding his child hostage. He agrees to report the ‘successful mission’ to the Kairagi as you and Sayu lie in hiding.

The Kairagi believe the Traveler is dead, but refuse to hand over Ogawa’s daughter, instead asking him to forge further requests and take down members of the Tenryou Commission. At this point, you and Sayu step in and confront them. During the fight, Sayu swaps the hostage for a decoy Daruma doll, and the Tenryou Commission show up to arrest the Kairagi. Sayu has certainly earned her nap. 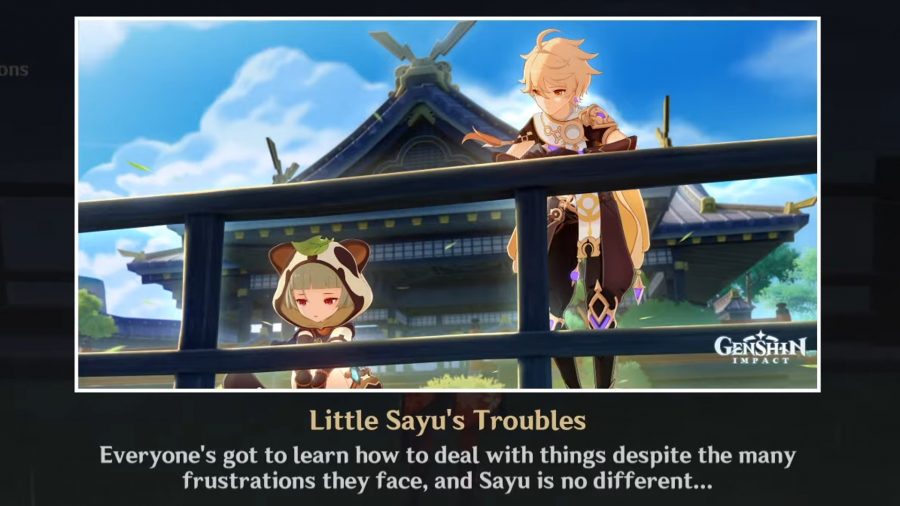 To get this ending, follow the same route as the previous ending – investigate the plot on your own, and go with Sayu to confront Ogawa. When he confesses he forged the mission, instead of asking for the truth, tell him to ‘save it for the Yashiro Commission’.

You and Sayu then deliver him to Ayaka at the Yashiro Commission, and Ayaka assures you she will take it from there. Ayaka offers encouragement to Sayu, who is reluctant to accept it, and walks off on her own. Speak to her and offer her advice to unlock the final ending.

Those are all the available endings for Sayu’s hangout event. If you haven’t completed the other hangout events, we’ve got guides for Chongyun, Diona, Barbara, Bennett, and Noelle. If you’ve got your eye on a new Genshin Impact character to recruit, take a look at the Genshin Impact upcoming banners.

Anyone know how to fix this download speed problem? Or is it just a visual bug? because it's been only happening on the Destiny upgrade for the last day or so : xboxone